Sell Your Hospital and Practice

(Transcribed and edited from Saturday, May 31, 2014 Livestream Broadcast)

In 1969, driving down US-75, along about Anna, Texas I said to the Lord, “If this is you that has been bugging me all these years, if you will sell my shares in a ‘certain’ corporation, I’ll do what you ask.”  Amazing. I involved myself in a corporation that frankly, I wish I hadn’t have and that’s enough said. But the next day I was on my way to Denison, Texas to attend a horse. I was an equine practitioner and veterinarian and I stopped at the Dairy Queen on Hwy. 5 in Anna and two of the shareholders of the corporation were standing there drinking a Coke or something, and I pulled over to get me a Coke and I got out and said, “Good morning, how are you”

"Going to Denison to attend a horse.”

“What are you all doing?”

“Where are we going to make the exchange of stock?” They told me, “Anna Bank.” I said, “I’ll be there at 1:00PM.” I got there at 1:00PM, walked in, sat down, we made our exchange, it was all stock, signed everything, walked out. I thanked them, they were [my] good friends till the day they died. 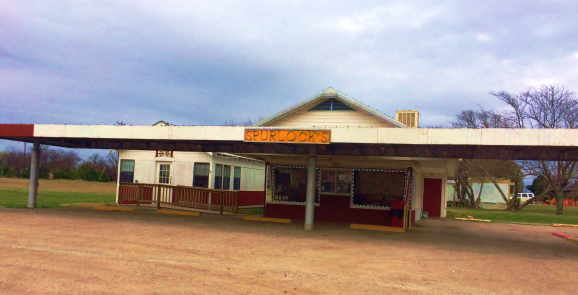 Then the renegade rebel Doyle was so relieved because I didn’t need that stock. I started thinking, “What can I do next, what can I buy? This makes my financial statement look really good. What can I buy next? a horse?” It was about two weeks and I had been thinking about this and I couldn’t come up with anything that I thought I ought to do; I’m going down the same highway about the same location and the Lord said, “Sell your veterinary hospital and your veterinary practice.”

He said, “Well you said you would do what I said.”

I said, “Well of course, but it did not include THAT.”

“Well it sure didn’t include THAT.”“

Well, you said you would do what I ask.”

Now I’m telling you as near accurate as I possibly can, the Lord and my conversation on US-75 going south, near Anna, Texas in 1969, the month of June, (This one might have been early July, because it was two weeks after the other one) and I said, “No, I can’t do that.”

“Well, you said you would do what I ask.”

I said, “Well nobody would buy it.”

He said, “Yes he will, I’ll make him.” (Charles Rodney, are you listening to this? Don’t blame me any longer, the Lord who took the rib out of Adam and made a woman—you asked me once if I believed that and I said, “Sure, do you believe that?” Well, He’s the one that told me you’d buy it.)

I couldn’t believe it; He (the Lord) and I discussed this several times, off and on. He said,“You’re going to sell it.”

Now, I was negotiating with Jesus, just like I would a businessman and He was talking to me, man to man and I’m almost—no, I am ashamed of this; that’s how little respect I had for Him, but that man Jesus, had a love for me that I never heard of. He said, “You’re going to sell it and Dr. Butler will buy it, I will MAKE him buy it.” He even called Rodney, Doctor. You never met anybody like Him.

I said, “Alright, ok,” hoping He’d go away, you know? After all, I said He’d been bugging me. That didn’t offend Him. It’s incredible what the Lord was doing, talking to me about selling. One day I had to go to Missouri and I was at my mother and dad’s house, getting ready to come back to Texas and this was before I sold anything. Dad said, “Doyle, before you leave I would like for you to look at a piece of property with me.” I said, “Dad I don’t have time to look at a piece of property, what is it?” He said, “It’s a farm.” I said, “Well I don’t need a farm.”

“Well, would you just look at it with me?”

He said, “Look, it’s got ninety acres in the bottom and it’s all in corn and it’s irrigated and they’ve got irrigation lanes all through the corn field and you won’t even have to get out of your car and you can keep your a.c. running.” I said, “Ok, Dad, let’s go.” We drove out and drove in, started driving up and down that corn field and I was driving along and I said, “This thing’s got some timber on it.”

I said, “Would you get somebody to go through and check the trees, the walnut, sycamore, oak, ash, whatever else?”

“Do you know the number?”

“Do you have any idea how much money they’d bring?”

He told me, I said, “Ok, not bad. Well, do you know an individual that would loan me this money?”

I knew him and I said, “Would you ask him if he’d loan me the total money to buy this farm?”

“I already asked him.”

It was Jesus, the businessman doing this. I said. “Ok.” I had a pretty good idea what things are worth and owned a farm in Texas, horses, cattle, other investments. It [143 acres] was in a trust for children that were underage and I said, “Would you talk to these people that are in the trust and ask them if they would take this amount of money for this farm. Dad said, “What?” I said, “Yes, I’d pay that, if you can get that done. Work it all out, I have to go to Texas—see ya’”

I took Dad home and in less than two weeks, he called me up and said, “Your bid is $275.00 above the minimum of what they can sell that farm for.”

That was the Lord making that bid. He knew what it had to sell for. I said, “Ok, get a lawyer, get it started.” I went back to Texas. In a few weeks, Dad called me and said, “The lawyers have it all worked out, you’re going to have to come up here and sign some papers.”

I went up and now the farm’s Doyle’s and the Lord’s. I went in there and got a bulldozer and dozed out thirty-three trees, burned the trees, buried the stumps, had the land all soil tested, brought it up to soil test--phosphate, nitrogen, potash, whatever, amen, now I had a farm in Missouri. So what does God want? Work on it.

Now I own a farm in Missouri, I might need the money to fix this all up.

Dr. Butler bought it, January 2, 1970 I drove away from it, went to Missouri a couple weeks later, played around on my farm.

“Right, [just] on the weekends, I’d come to Texas or they’d come to Missouri.”

Kathie: “Right, and all the other time it was just you working on the farm and reading and praying.”

“Right and talking to people that every time I would meet one of them they talked about Jesus.”

Kathie:  “And you weren’t even baptized in the Holy Spirit yet?”

“No, I was born again but I wasn’t about to admit it to anybody.”

Kathie: “And this is where you saw the vision of the vine?"

Those days were tough on this guy. I was a proud man, a successful man, much greater success than I ever deserved.”

Kathie: “You know I see with your practice, and God had told you in 1958 not to be a veterinarian but you went ahead and God let you,”

Kathie: “And He gave you a beautiful practice, top notch…”

Kathie: “Beautiful farms, gave you everything you wanted and then turned right around and required it right back.”

Kathie: “But what did He say, if you read the verse, it says you have to forsake your mother, your father, your children, your wife, your lands, for my sake, He actually gave you something to forsake, a lot to forsake.”

“A lot, yes He did. You know I sold that farm in Missouri and when I got the money I had enough profit from it to make a one-third down payment on 6-1/2 acres with a house in Argyle.

Kathie: “Like I said, bought your way into the wilderness.”

Kathie: “You only had it a couple years?”

Kathie: “I saw the farm, we went there, it’s beautiful.”

“Yes, it’s a picture, the low water bridge is on it, [pictures] on my website.”

“And you know, when I got ready to sell the farm I called Dad and said ‘Look, I need to sell this farm, I’m moving back to Texas’ and Dad said, ‘Doyle, are you sure you want to sell it?’ I said, ‘Yes, sell it, put a $2.00 ad in the Sarcoxie Record. He did and somebody bought it. Jesus, the businessman.

“Oh the best, THE best. He’s been so good to me and Patti and Kathy and a lot of other people because of His mercy, longsuffering, graciousness, abundance of goodness and truth and He has issued it through me to a lot of people. How can I say anything, but thank you. I don’t know any other words. Look at what God’s put around me, what He has put with me, from Africa, Europe, U.S for certain, and other places. I didn’t deserve any of this. You know what I deserved? Death. I deserved death, but there is a man that was completely innocent, without sin, became my substitute and yours, that we might be the righteousness of God in Him, Christ Jesus.

I plead with you, submit yourself to Jesus of Nazareth, believe the gospel and walk with Him, wherever you’re at in the world. You’ll never do anything close, you can’t compare it but you can say this: hell and death—life and riches and honor with humility. Now which are you going to choose? What Jesus did for me, He’ll do for you and He’s doing through me for a lot of people.

Remember, the law came by Moses, grace and truth came by Jesus Christ and of his fullness have we all received and when He revealed the gospel to me and ordained me to preach it and minister it, He granted me the grace, through the gospel, to preach that gospel to the world. And you are a partaker of my grace, but my grace is not greater on you than it is me, don’t forget that. God’s grace has been given to me, I found grace in His sight in a wicked generation of people.

Servant and apostle of the Lord Jesus Christ